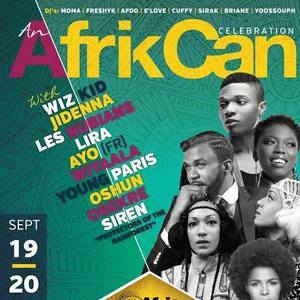 AfrikCan is an organization which aims to showcase the African continent through a positive and uplifting light. AfrikCan is a celebration of African Culture through food, music, fashion, arts, and science.

This event will see the participation of world renowned artists such as Wizkid, Jidenna, Les Nubians, Lira, ...

The main objective of AfrikCan is to raise social and cultural awareness about Africa, and to highlight the exceptionalism and greatness of Africa and its people.

AfrikCan, the first annual celebration of Africa’s positivity and creativity, includes the sound, the word, the look, the philosophy in action. Taking place at New York’s La Marina, the festival unites established artists and rising stars, all reveling in their heritage and discoveries as Africans pushing forward in a new direction.

In its variety, the festival echoes the experience of many passionate, dedicated African creatives, like unstoppable Boston-area entrepreneur Marie-Claude Mendy, the festival’s founder and driving force.

“I grew up in Senegal, and there were three huge things in our culture: food, fashion and music,” Mendy explains. “Even in a poor household, when they entertain the meals are amazing. They dress up in the finest fashions. There’s always music, and I grew up with reggae, Cuban, Brazilian, soukouss, zouk, soul, salsa, disco. That was in Dakar, but you’ll find stories like that all over Africa. That’s what we’re showing here, we’re representing all the regions of the continent, from Dakar to Dar es Salaam, from the Cape to Cairo.”

Full line up and schedule at www.afrikcan.com; follow and add to the conversation at #afrikcannyc #afrikcanfestival

Wizkid will not be appearing at the festival due to unforeseen conflicts.

“There’s a big movement toward African unity, at home and abroad,” says festival curator, Osekre Ishmael, a young musician and arts instigator with roots in Ghana. “We want to connect the Pan-Africanist and Afropolitan generations, the young and the established. The voices are all relevant, they have something to say to one another. We’re bridging gaps.”

That total experience of the modern, outward-looking Africa with its rapidly growing economies and youthful energy is what AfrikCan will showcase, giving America an eyes-wide glimpse of how broad the spectrum of African life really is these days. “We’d like to show it all,” Mendy observes. “During the day we’ll have storytelling, literature, and conversations about activism and engagement. I want to give Africans a platform to voice their ideas.”

Nothing involving Marie-Claude Mendy would be complete without food; after all, that’s her livelihood and reputation. In the 1990s she moved to the U.S. and a few years later she opened Teranga, the celebrated Senegalese restaurant in Boston, where she still presides over the kitchen.

“Some of my earliest memories sitting on the kitchen floor, peeling garlic, grinding spices in the mortar and pestle, handling any chores my mother would let me do,” she remembers. “That inspired my passion for food. When I was 11, I started making family dinners and meals on weekends.”

With her ability and keen entrepreneurial eye, Teranga has become one of the city’s culinary success stories. But success as a restaurateur has made Mendy hungry to do more. AfrikCan is the result.

“It’s time to get out there and make a statement,” she declares. “I wanted to do something big, something that expanded on the restaurant’s spirit of hospitality. The festival is part of Teranga, and it’s going to keep growing every year.”

Beyond encouraging ongoing conversations among Africans and between generations, AfrikCan wants to spark curiosity and excitement in general, to help people see the beauty and lay all the old myths to rest. It’s the global community that’s Africa, proud of its position. Of course, flowing through it all will be the music, one of the most thrilling touchstones for the continent’s multifaceted cultural achievements.

“Music is an integral part of my DNA,” Mendy notes. “I was introduced to it the day I was born and it plays such an important part in African culture. Without the right music it just wouldn’t be a festival!”